Located in Etobicoke at 2943 Bloor Street West, we are a family-owned and operated South African restaurant.

Tuesday to Thursday
12 to 9 pm

Kindly type your message below, we will be back to you within 48-hours. No soliciting, please.

We do NOT take, modify or cancel orders here.

We do not sell uncooked products to the public. Our food is 100% hand slaughtered halal.

Dine-in open. Prices are subject to change in-store or through our delivery partners without notice.

This South African restaurant celebrates the spirit of braai

Suresh Doss: There are very few South African restaurants in the province. We have a significant South African community here but there are few places that celebrate the superbly diverse region.

Suresh Doss: This is one of the most diverse parts of the continent so it would be impossible to try and cover the vast influences in this region; European, Indian, East Asian, Malaysian and more. So I propose an introduction to South African cooking. At Plan B, you can expect to get a slice of one of the most popular cultural traditions of South Africa, which is celebrating braai.

Ismaila Alfa: Have you ever experienced braai in South Africa?

Suresh Doss: I had the privilege of travelling to SA about three years ago on a wine tour. I ended up in Stellenbosch, near Cape Town and the first real meal I had there was the braai. We were on this escarpment, overlooking vines in every direction, the mountains were silhouetted against the setting sun. The evening was around the corner. We had a group set up this very big pit, filled with charcoal and lit it up. And over the next hour people would bring various things and place it on the fire; various cuts of seasoned meats or stewed vegetables or bean dishes.

As the sun set, you had this wonderful, communal meal, course after course of whatever was ready to be consumed; a plethora of textures and dishes, with a common underpinning of charcoal flavour. It was a very convivial experience, which is what Haroun and Shamiema are trying to celebrate in their small restaurant on Bloor West…

Read the full story by Suresh Doss at CBC NEWS 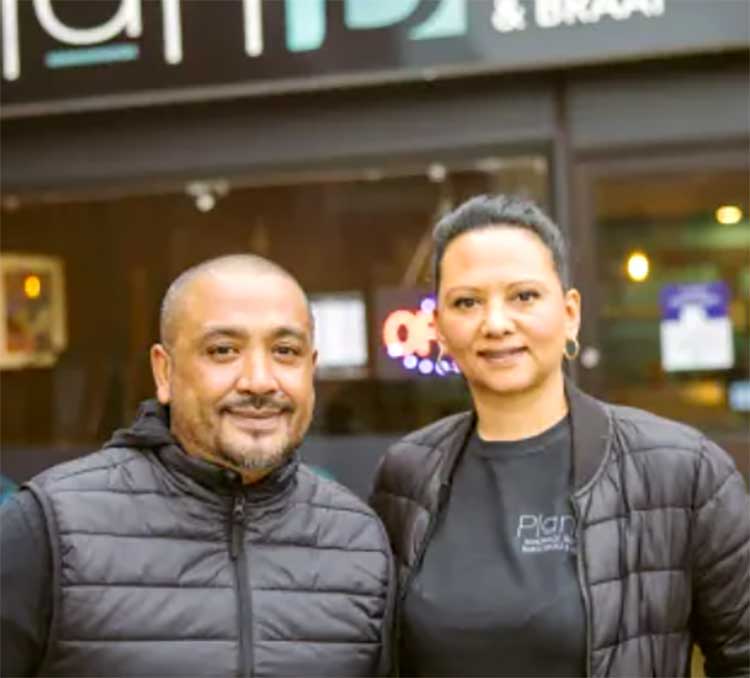